Hear Me Roar: Creative Writing to Heal the Culture (While Landing on Our Feet)

My recent workshop at Kismet Cowork, Hear Me Roar: Creative Writing to Heal the Culture was a real high for me, and I’m still digesting it. But I am very happy to say that the whole time, no one had to call 911. (I once got a black eye at a poetry reading, but more on that another time.) 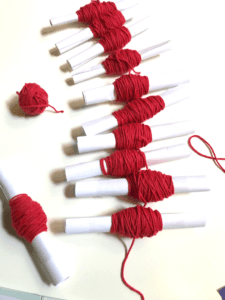 While we were setting up inside before the workshop, I had to go down the block for something. Coming back up the sidewalk, I moved off the walk to let someone pass, unknowingly stepping into a four-inch drop. First my ankle, then my knee went sideways, but the second I knew I was falling, I relaxed into it. I’ve learned that it’s the best way not to get hurt. Still I was surprised to find myself flat on my back on the sidewalk with my arms flung over my head, like a surrendering bandit. A few concerned citizens peered down at me. My instinct in a situation like that is to jabber whatever comes into my head, which was this: “I just totallyfelldownbutI’mnotabithurt!” 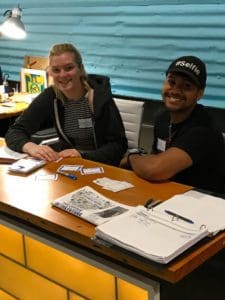 As the citizens maintained their commitment to peering down at me, I blurted out an addendum: “And I’m not embarrassed at all!” Being a shame-prone person, this felt a bit celebratory.

One of the people standing over me was a blind man with a white cane, who had just gotten out of a car. “I didn’t see a thing,” he responded, with a deadpan face.

It was delicious. We had made a joke! He offered me his hand, and helped me up. Indeed, I was unhurt, but a nice woman commiserated with me over some scuffing on a Bakelite bracelet I’m fond of.

I took the fall as a good omen. After all, I was about to lead a 3-hour writing workshop, in which I planned to involve eight people I don’t know very well in a party game I haven’t played since I was maybe nine years old. Walking back into the event space at Kismet Cowork, I felt vulnerable. 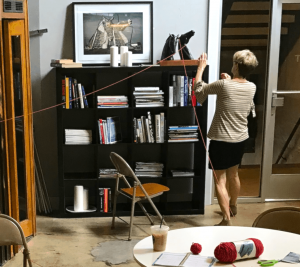 But, after all, what’s a writing workshop about? Whether it’s a warm, fuzzy and supportive one, or survival-of-the-fittest cutthroat, it’s about vulnerability.

Play is a huge component of creativity, but a streak of Puritanism in our culture views adult play as invalid or shameful. In itself, play is not self-censoring, although even young children at play might censor themselves due to fear of some negative consequence. I took a chance by opening a writing workshop with a party game–but I was confident that giving participants a playful experience would help them to feel mutually trusting in their vulnerability. Within a group, vulnerability without mutual trust is shameful at best, and abusive at worst. Mutual trust without vulnerability means that the vulnerability only occurs to the depth of the trust—which means limiting interaction to prescribed social codes.

My grandmother introduced me to the Spiderweb game. As a kid, I loved the way long pieces of yarn woven throughout a room transformed a familiar room into something new. At the ROAR event, each participant took the end of a long piece of yarn; as they unwound the group web of interwoven strings, each found not candy or a toy at the end of their string, but a sealed red envelope. 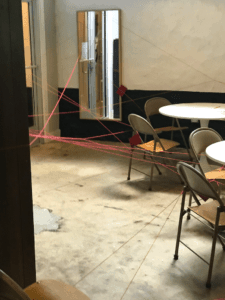 I had been worried that people might be tripping over one another’s yarns with far less desirable results than I’d experienced outside, but they unwound the Spiderweb without a hitch.

But all of this is about what didn’t happen at the workshop. Here’s what did happen: After the game, everyone had a envelope with instructions not to open it until after our group discussion. Inside each one was a quotation to be used as a writing prompt.

Here’s one of them, from Dinty Moore’s wonderful book, The Mindful Writer:

The true work of the writer is the true work of all artists: to take risks, to lean far out over the edge of the accepted truth, to see what can only be seen from that vantage point. 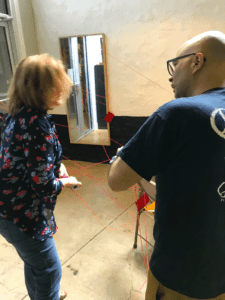 Ask yourself…Am I in over my head? Am I posing questions in my work to which there can never be satisfying, final answers? Am I trying to tackle a project here that is well beyond my capacity as a writer? Am I just a little afraid of the direction that all this is going?

If the answer to these questions is yes, then you are heading in the right direction. Steady on. 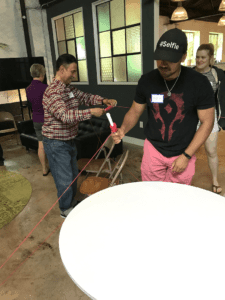 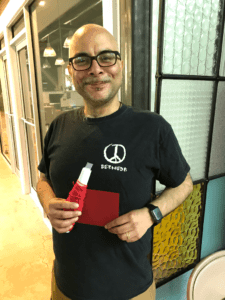 Every participant received a different quote. What impressed me the most during our discussion afterward was how vulnerable people allowed themselves to be in the group. Yet without taking such risks, we can’t overcome the isolation that plagues any creative person who spends long hours alone doing work that may or may not be received out in the world.

While everyone was working with their prompts, I looked  into my old files at some work I did last winter. I reread a highly personal piece that I’d never posted on my blog—it was well written, but it felt both vulnerable and shaming. While I hadn’t deleted it, I’d wanted to leave it in deep freeze. I felt a bit shaky as I gathered everyone back for our wrap-up discussion. Yet something unexpected happened during the discussion–something that emotionally mirrored my experience of falling off the sidewalk.

One member was telling the group  how for the first time, they’d been able to access and write about a very painful memory. They didn’t read the piece aloud; there was no need. But as they talked, I saw my own pain-filled writing in a new light. It felt acceptable. I felt that it was okay to be a person who would write such a thing–that is, my shame lifted, and I felt seen.

And I believe that all the participants did as well.

Through Hear Me Roar: Creative Writing to Heal the Culture, it’s a risk I’m committed to taking again. And again. 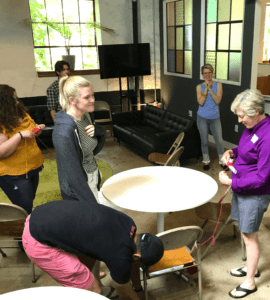 P.S. I’m aware of how lucky I am that to fall flat on a sidewalk isn’t anxiety provoking, because I have a good chance of NOT being hurt. This isn’t true for everyone, not by a long shot. P.P.S. I wish I had space here to talk about the group discussion, after the Spiderweb game, of how writing fosters cultural and political change. It was co-led by my friend Dr. Rita Fierro who has waaaayyy more experience than I do in running groups (notably groups in which tension and conflict arise). I’ll  have to offer more ROAR events to catch that on the next blog.

P.P.P.S. Many thanks to my web-spinners and door greeters, Charity Mallon and Will Egoavil. AND a huge rosebud of love to my intrepid photographer and poet friend, Deanna Bond.