January #MeToo. “If I tell, I will die” Is About Shame.

Writing this was a big deal for me. It’s taken decades to get this far.

At a young age, I was fascinated by mirrors. The fact that our twin house was attached to a “mirror” where the family next door lived their lives in reverse order—The living room being opposite from ours, etc.— sounded marvelous to me.

One morning, the couple in the house next door woke up in their backwards bedroom to find four-year-old me by their bed, staring at them.

I loved the idea of a mirror house so much that I had to check it out for myself; lucky for me, their front door wasn’t locked.

I’ve always been adventurous. I’ve always searched for the magical world inside the looking glass.

When I was a bit older, I risked an adventure in intimacy. I have told my story of childhood sexual abuse many times, but I usually hold back. Very few people know the full story.

The part I have not told has affected my writing life, which was strewn with years of unfinished projects. I would tell myself I’d lost interest, but in truth I didn’t want to experience feelings that writing could trigger.

I adored my mother’s adult cousin T, who visited when I was not quite six. One weekend morning, my mother said not to bother him while my parents were busy making breakfast. I thought about it; I figured she was just talking because she didn’t want to be bothered. I knew he’d be delighted to see me. The guest room was on our third floor. I floated joyfully up those stairs, feeling like my nightgown had flared into wings at my feet.

I found T shaving at the sink. He greeted me with a smile; we talked. Then, somehow, his eyes became reptilian. No words can describe what happened next. All he said afterward was, “Don’t tell anyone you came up here today.”

Slowly, I returned to my room. What to do? Should I tell my parents? I knew it instinctively: They would believe T, not me. I imagined telling, but I became overwhelmed. I felt myself beginning to slide apart sideways, like a too-high stack of magazines. I knew for certain that if I told my parents, I would die. I returned from potential annihilation by telling myself to forget all about it. I didn’t know what that meant, but I actually did forget. After that weekend, 20 years passed before I remembered the abuse.

Now I doubt I would have physically died. But. If you weren’t abused, this may be hard to understand: I know that actually experiencing my parents’ complicit “agreement” with my abuser would have ripped up my sanity. Going crazy has always been my biggest fear.

In my mid-twenties, I remembered the abuse and told my parents. Neither one doubted me. But: “If you were too young to know what sex was,” they asked, “how could you have been frightened?” Even knowing what T had done, they continued sending him a yearly Christmas card “to avoid upsetting the family.” Turns out, I was a smart kid at age not-quite-six.

Ironically, I’m a born storyteller. I love the adventurous possibilities of fictional worlds, but I always held back. Abandoning a novel (about sexual abuse, duh!) after working on it for 10 years is one example. To finish would have meant being willing to experience whatever it brought up.

I now see that shame is way, way bigger than I once thought. My fear of going crazy was about taking on my abuser’s shame, swallowing it, and calling it “Helen.”

If I tell, I will not die. I experience a simple clarity far beyond intellectual conclusion. It’s integrated in my body and my feelings.

I’m not sure where I’m headed. But taking risks in the past has inevitably led to joy. Getting married was a risk, and it was terrifying. 30+ years later, it’s one of the best choices I’ve ever made. 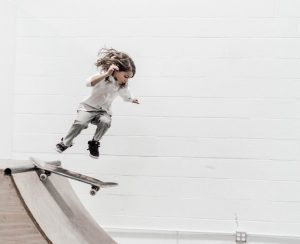